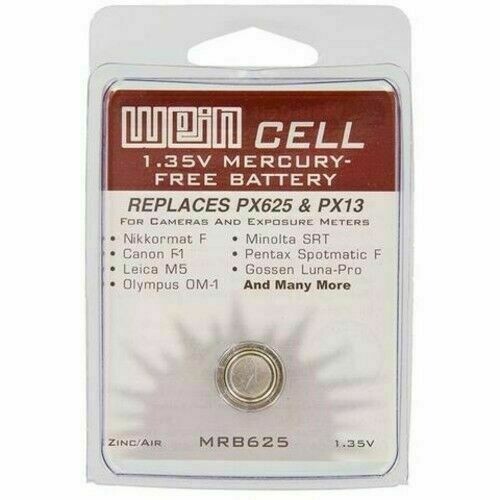 The Wein Cell MRB625 is a 1.35 volt non-mercury battery. It is designed to replace Mercuric Oxide PX625 and PX13 batteries and is commonly used in cameras and exposure meters. The Wein Cell MRB625 can be used in the Nikkormat F, Canon F-1, Leica M5, Olympus OM-1, Minolta SRT, Pentax Spotmatic F, Gossen Luna-Pro, and many more.

The Wein Cell MRB625 has a distinctive appearance with its 'stepped' concentric disks.

The WeinCELL MRB625 is a custom zinc/air battery designed to replace banned mercury batteries. Unlike 1.5v alkaline replacements such as the LR9 whose unstable output can produce exposure errors, WeinCELLs deliver the same 1.35 V voltage and stability of output as did the mercury batteries. In contrast to hearing aid batteries. which only last 1 month, the WeinCELL MRB625 batteries last much longer, some times up to a year. To achieve this longer life, the MRB625 used a proprietary electrolyte and has only two small air holes, rather then the 7 larger holes found in standard hearing aid batteries.

To use the WeinCELL MRB625, the adhesive tab must be removed. This allows air to enter the cell. After about 30 minutes, the MRB625 is fully activated and ready for use.

The use of the MRB625 WeinCells in the Gossen Lunasix 3 & Luna Pro S meter can be problematic because the central negative contact of the battery holder has sprung elements which have a dimension greater than the diameter of the negative terminal of the WeinCell. This can result in the cell being short circuited! The original PX625 negative terminal is 11mm whereas the WeinCell MRB625 is only 8mm. By placing a 13mm brass washer over the sprung arms this problem can be solved. Therefore, for use in the Lunasix 3 Gossen ask for the free of charge 13mm conductive washer.

Can be stored for up to 10 years: WeinCell batteries are only activated by pulling the sticker.
Full battery voltage approx. 2 hours after removing the sticker.