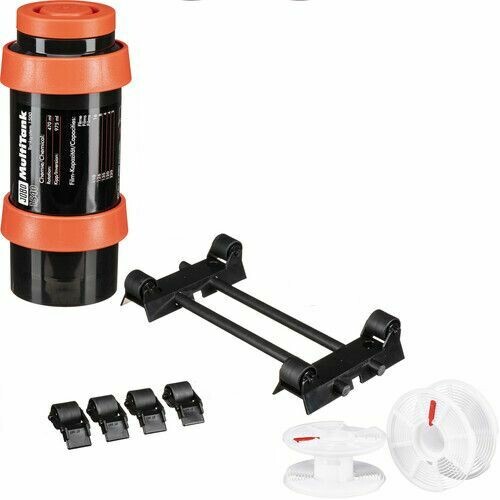 Depending on which lid you have on your tank, you can use the tank for normal hand development or connect it to one of the many processors (with a toothed ring for the lift and with a magnet for the models without lift).

The Jobo 1540 film development tank is the largest tank in Jobo's 1500 series development tanks and consists of a Jobo 1510 35mm tank combined with the 1530 expansion module. The tank comes with one adjustable 1501 spiral for the development of one 35mm film or up to two 120 roll films. The packaging also includes the standard red tank cover for manual inversion development.

When the tank is used by hand for inversion development, the tank must be filled with only 975ml of photochemistry, making it one of the most economical ways to develop multiple 35mm films or roll films. For rotary development with a compatible Jobo processor, the tank only needs 470ml of photochemistry to get the job done. In that case the tank does need a cog (J1505) to attach it to the processor lift or a magnetic base (J1504) if the processor is not equipped with a lift. Both accessories are not included and are available separately.

With the JOBO 1530 "expansion module", a 2-piece tank can be transformed into a 5-piece, 7-piece, 8-piece tank in no time. The tanks always come with a maximum of one spiral. A plastic lid for hand development is fitted as standard. By inserting the gear rim, each tank can be converted into a processor tank.

The Jobo Roller Base No.1509 helps you to process with Jobo barrels at room temperature in daylight.

If you don't need temperature control but still want to work in daylight, the roller base is just what you need.

Rotational development saves you chemistry. In rotation, a Jobo tank consumes e.g. 140ml for a 35mm film (compared to 250ml for still development). With rotational development, the homogeneity of the result increases, but you lose slightly in sensitivity/contrast control. For B/W you therefore have to weigh up. For colour, it can be recommended without reservation.

Save this product for later