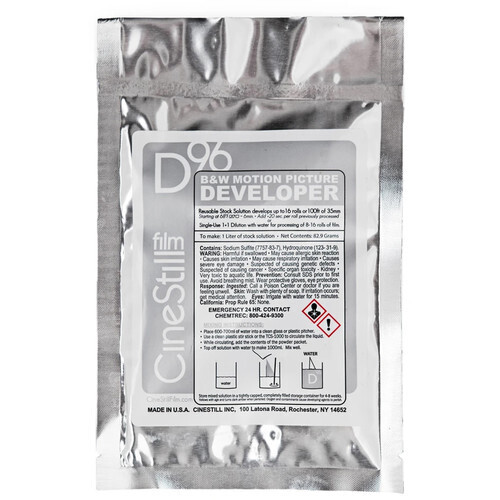 Cinestill D96 is a powder-based film developer that is well-suited for use with black and white motion picture stocks, as well as other traditional and tabular grain films. It provides a distinct S-curve contrast profile with forgiving highlight control for a unique cine-inspired look.
The world’s only powder rapid fixer also happens to be the most potent. So potent in fact that you have to further dilute 1 liter of working solution to 2 liters in order to match liquid concentrate rapid fixers. We use the purest ammonium thiosulfate agents to fix your film and make it archival in record time. Just add water!

1 liter of working strength F96 Rapid Fixer solution fixes 24+ rolls of 135 or 120, or 100 4x5in sheets of black & white film. 1+1 paper dilution fixes 80 sheets of 8x10in resin coated (RC) prints, or 40 sheets of 8x10in fiber based (FB) prints.
Wash films in running water for 5–10 minutes at a temperature within 5°C (10°F) of the process temperature.
Film clearing time: In order to avoid the risk of insufficient fixing, film should remain in the fixer for twice the time it takes the emulsion to visibly clear. Used fixer should be discarded when film isn’t visibly clear in twice the time as with fresh fixer. The clearing time of a film and fixer combination can be found by the following method. Take a piece of scrap unprocessed film and place a drop of the working strength fixer on to part of the emulsion side. Time how long it takes until the emulsion under the drop is a clear spot, this should take between 15-60 seconds with traditional B&W films. The time it takes for the film to clear is the clearing time. The fixing time needed is double the clearing time.

Cinestill D96 is a powder-based film developer that is well-suited for use with black and white motion picture stocks, as well as other traditional and tabular grain films. It provides a distinct S-curve contrast profile with forgiving highlight control for a unique cine-inspired look.