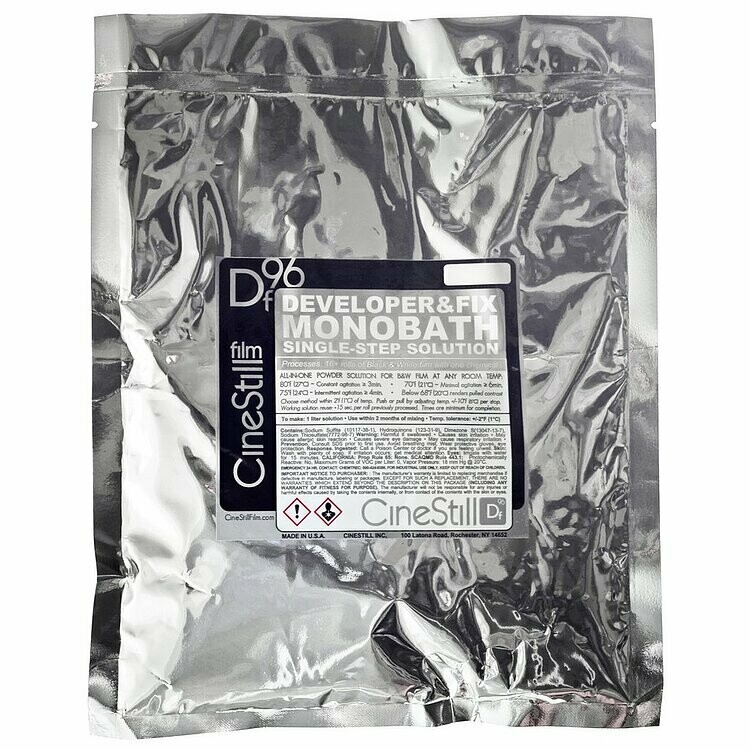 Cinestill has introduced an updated and improved fixation developer, the DF96.

The CineStill B&W Monobath is a film developer and fix in one solution which drastically simplifies the development of black and white film. The monobath can be used with all types of black and white film even though films with T-Grain technology such as Kodak T-Max and Ilford Delta require double the development time. It is based on Kodak's D96 developer for Motion Picture Film.

The bath comes in powder form and is easy to mix with water. The main advantage of powdered chemistry is that it has an almost unlimited shelf life and the resulting working solution can be made according to your own wishes and use. The monobath is not a "one-shot" solution but can be used several times. The supplied quantity of 1 litre should not be diluted. With each reuse of the bath you have to extend the development time by 15 seconds. So at the third use of the bath the development time at 27°C is already 3 minutes and 45 seconds. Approximately 16 films can be developed with the bath. As soon as the solution starts to show a dark colour it is no longer usable. The mono bath has a lifetime of about 2 months after opening the bottle.

Attention! Some films require extra attention. For example, the development time of the Bergger Pancro 400 must be tripled. The film must be soaked in a bath that is 1°C warmer than the actual development bath at least 5 minutes before development. For good results, we therefore recommend continuing to use the classic film developers as the mono bath is less suitable for this type of film.

Below 24°C the films are pushed pulled above 27°C.

In one liter of stock solution 16 films can be processed one after the other. The stock solution must be poured back into the canister again and again. For each film already developed, the developing time must be extended by 15 seconds. As soon as the solution starts to show a dark colour, it is no longer usable. The monobath has a lifetime of about 2 months after opening the bottle.