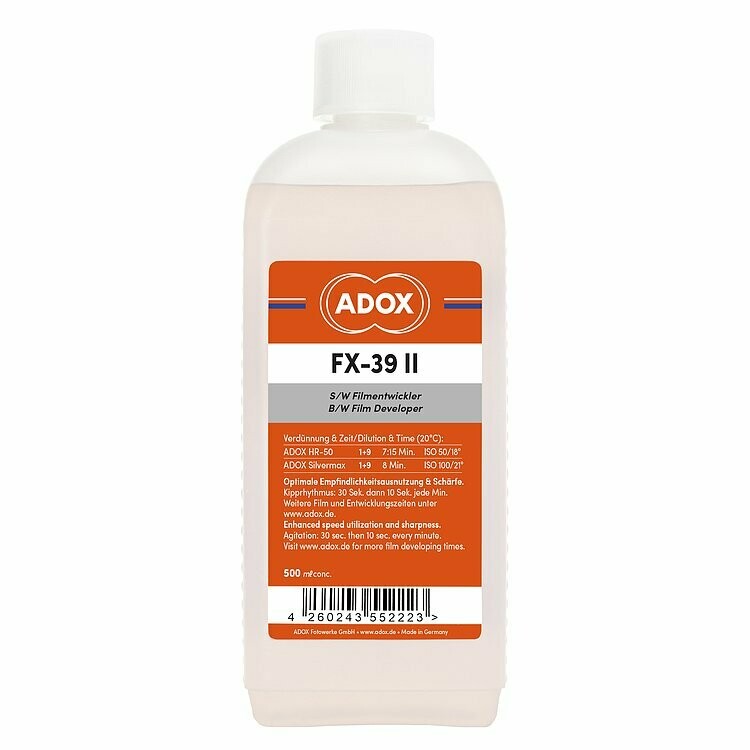 Adox FX-39 Type II is an improved version of the original FX-39 film developer, which features better keeping properties and is less sensitive to low temperatures. FX-39 is based on Willi Beutler's formula for Neofin Red, but was further improved by Geoffrey Crawley. FX-39 II is as a compensating black-and-white film developer which delivers excellent subject detail rendition, sharpness and resolution.

The compensating effect of the developer can be controlled in a very wide range by just varying the dilution. Subject contrast can thus be precisely adjusted to your personal preferences no matter which type of film you use. The extraordinary compensation capabilities of this developer mean you're going to have to give up on some of the sharpness performance. If you're looking for a film developer that delivers you the sharpest grain possible, developers like Adox Atomal, Bergger Superfine or Kodak X-tol are more well suited for you.

FX-39 proves to be the excellent companion for most low- and medium-speed films. In the ISO 400 class the best results are obtained with Kodak Tri-X, Kodak T-MAX 400 and Ilford Delta 400. If needed FX-39 can also be used for increasing film speed by maximum 1 stop (push processing).

FX-39 II is especially suited for beginners or educational purposes because of its high equalizing power, low toxicity (no GLS labeling necessary) and ease of use (liquid concentrated one shot developer).